@tootgail Your son is one of the highest paid and gifted athletes in football. Sit down and shut up. He fucked up. Plain and simple.
October 17th, 2021

@MieshaTate Abuse? Lmfao. Go be offended somewhere else. The coach was fuckin LOST on the shit his fighter was doing. Dude was PERPLEXED.
October 16th, 2021

If you're a browser-based game player and have seen games that allow you to earn free credits by simply filling out surveys, downloading software, etc., you've probably thought about how hard it is to get these offers to complete. A lot of times, your offer completes with no problem, but the offer provider does what they call "skimming leads" and won't actually credit you for your completion even though they are earning on the back-end for it.

In light of this information, I've come up with a pretty great way of getting these offers completed. Granted, there's nothing you can do to show an offer as completed that the provider has "skimmed", but with this method, you can complete a ton of offers so that you'll get credited more often and the skimmed completions won't seem like as much of a loss.

Basically what this guide is going to be showing you is how to install a virtual operating system, install an OS, and lock the OS down so that the stuff you download for these providers can't ultimately effect your master system or the virtual system. First of all, you're going to need some software. This software needs to be obtained legally (even though this software is readily available from torrent websites, I will not and cannot condone you downloading this stuff from those websites). You will only be seeing links to official websites for this software.

This is going to be a fairly long post, as it's going to be incredibly detailed so as not to arouse any complications or misunderstandings. There are screenshots throughout the process to help you know exactly what I'm talking about and which buttons to press, etc. This is your one-stop shop for getting free browser game credits.

This is the software you're going to need:

Once you've gotten VirtualBox installed on your system, you're going to need to click the "New" button at the top left to create a brand new virtual drive. 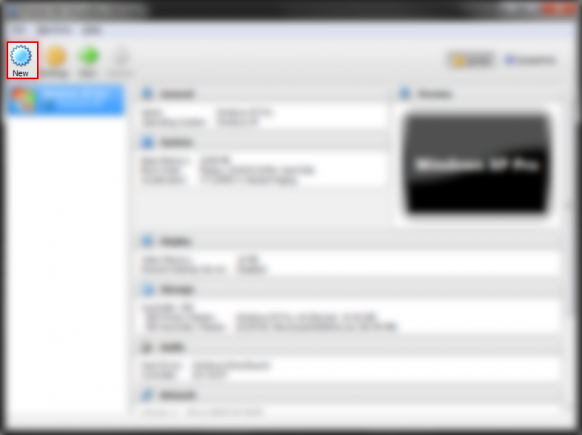 Set the "Name" to whatever you'd like, but I choose Windows XP Pro (or Home if that's what you have). Set the "Type" to Microsoft Windows and the "Version" to Windows XP or Windows XP (64-bit), again depending on which version of XP you have. Mine has the "- 2nd" tag in the Name because I already have a system setup as Windows XP Pro. 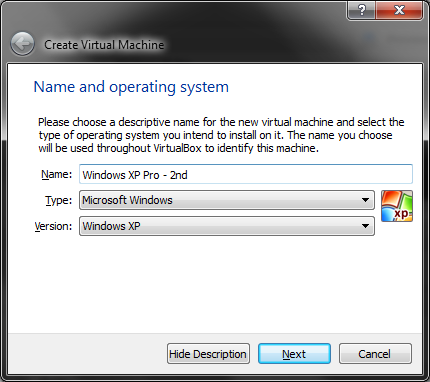 Click the "Next" button and you'll be presented with the Memory Size window. This is the amount of memory from your main system that you're going to allocate to your virtual machine. I typically give it half of the memory that my main system has, so go ahead and move the slider over to however much you want. Windows XP can run just find on 1024MB of memory, but for this example, I'm giving it 4096MB (half of my main system's memory). 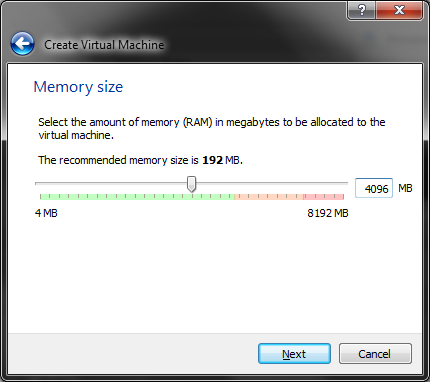 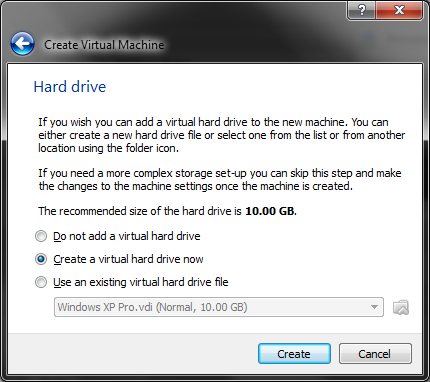 In the next window, choose "VDI (VirtualBox Disk Image)" as the Hard drive file type and click the "Next" button. 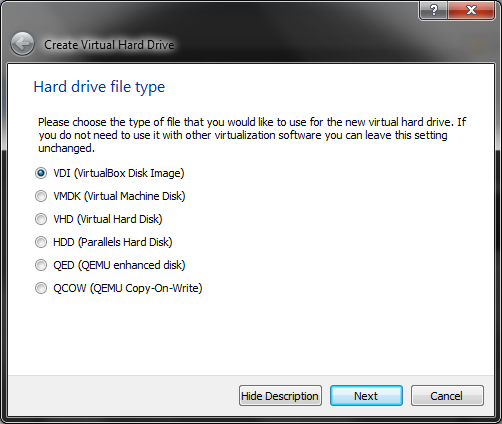 On the next window, you need to change the option to "Fixed size" and not "Dynamically allocated". Once you've done that, choose "Next". 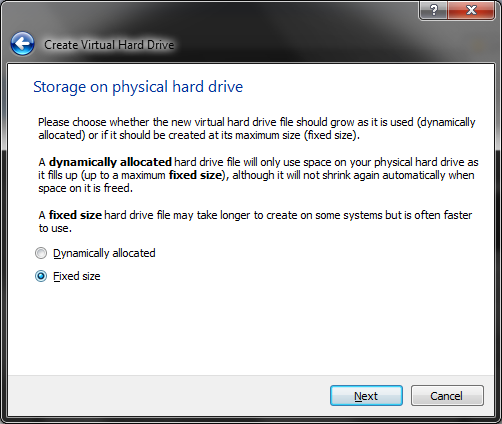 Leave the size of the hard drive set as the recommended value (in this case for Windows XP Professional it's 10GB) and then click "Create". 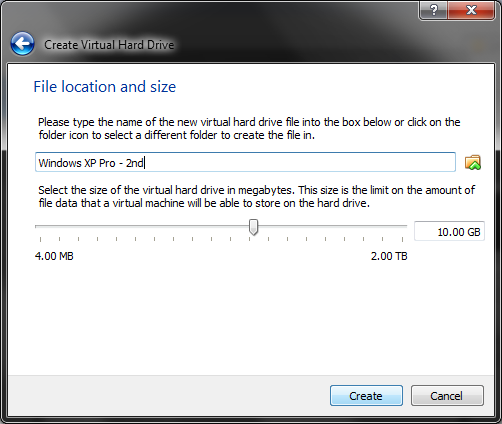 You are then presented with the message that the hard drive is currently being created. Give it some time, as depending on how fast or slow your master machine is, it could take a little bit.

After the hard drive has been created, you'll see it listed in the left-hand menu of VirtualBox. Before you open it though, we want to give it it's own IP address and let it function as a regular computer on our network. Do this by clicking the drive on the left and then choosing "Settings" from the top. Follow the other screenshots until you've gotten the system configured properly. 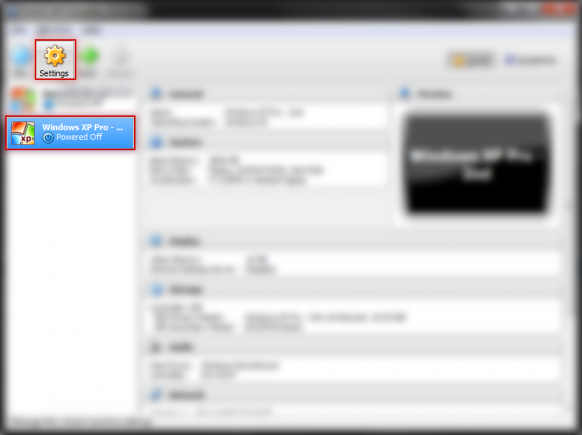 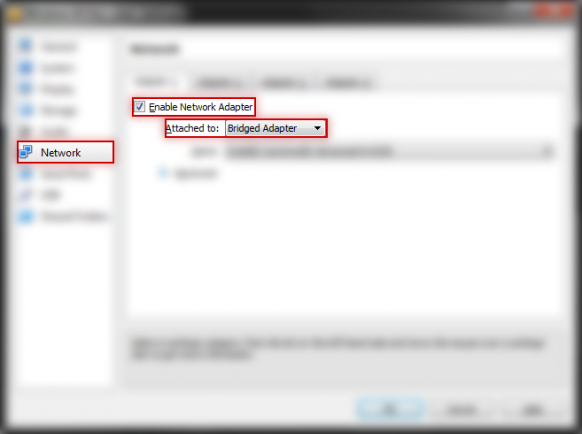 Click the "OK" button at the bottom to save your settings. Now, double-click on the operating system on the left that you just created.

You'll get a new window pop up asking you to select a start-up disk. Click the folder icon to the far right and then navigate to where you have your WindowsXP.iso file located, and then double click on that ISO to load it. 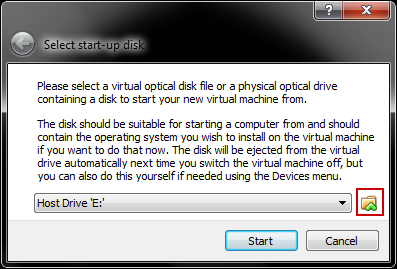 I have navigated to my Windows XP Pro (SP3).iso file and loaded it. 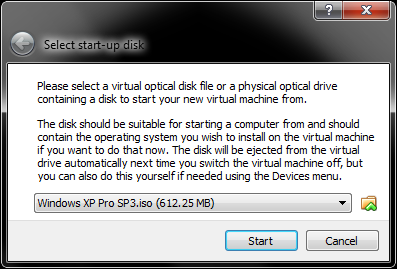 This is a legitimate copy I purchase a long time ago, and I'll be using it for this tutorial. Once you've loaded your ISO into that section, click the "Start" button.

You should then be presented with the following Windows XP installation screen. If you are unfamiliar with how to install Windows XP, I suggest you Google that, as it's beyond the scope of this tutorial (although it isn't hard, there are just plenty of things to configure). It will work exactly like you're installing Windows XP onto a regular computer, so if you've ever done that, you'll be fine. 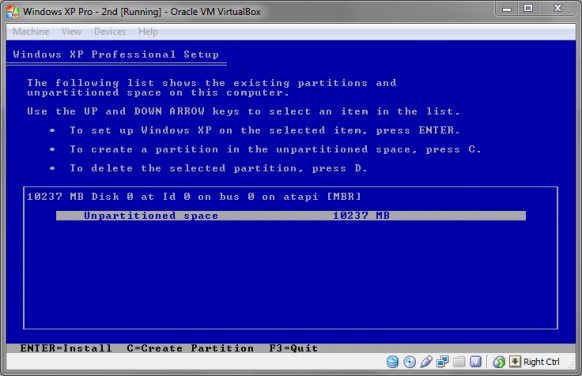 Once you get all the way through the XP installation, you will be taken to your XP desktop. This is your new, fully-functional, XP virtual system. Feel free to customize it however you see fit, such as installing all of the updates available as well as modifying the look of the operating system. For this tutorial, I'm leaving it like it is except for installing Google Chrome. Use Internet Explorer to navigate to http://google.com/chrome inside of the virtual system and install that. Chrome is much quicker and easier to use than the bulky Internet Explorer that comes with XP.

After you've installed Chrome, set it up the way you like it. The best way I've found to do this is to create bookmarks to the games you play most often (that have TapJoy or other in-game reward systems in place) so that you don't have to type out the URL for the game every time you boot the system up. Login to those games, save your passwords in the browser, and finish customizing Chrome the way you'd like.

The final step is getting DeepFreeze installed on the system. The installation is incredibly simple and will take no time at all. Once it has been installed, it will automatically reboot the virtual machine and you will be brought right back to the desktop. If you ever want to make a change on the system, all you need to do is hold the shift key down and double-click the bear icon in your taskbar. This will bring up the DeepFreeze menu and allow you to either boot in Frozen or Thawed mode. Frozen mode means that no change will be saved on your system, and Thawed mode means that your virtual system will function as normal. You always want to make sure you are in Frozen mode when doing these offers. The only time you'd want to boot into Thawed mode is if you were updating the system or adding a new bookmark to Chrome or doing some other change that you'd like to stick. Once that change has been done, be sure to boot back into Frozen mode immediately.

Now comes the fun part: getting free in-game credits. What you want to do (while in Frozen mode, of course) is head to TapJoy, SonicAds or whatever other in-game reward system is in place. Look for the section titled "Downloads" or "Free Software", etc. You'll want to download the software and install it 100% the way the executable is defaulted to install. This means installing all of the crappy spyware/adware/viruses that the executable comes bundled with (I hope you didn't install an anti-virus somewhere along the setup process!)

Some offers take anywhere from a minute to several hours to actually credit your account. Here are a few things to keep in mind when it comes to downloading/installing software for your in-game rewards:

That's it for the guide. This is a fool-proof way of getting offers to complete through places like TapJoy, Matomy, SonicWall, etc. without risking the integrity of your actual computer. If you have any questions regarding anything posted above, please feel free to leave a comment below!

Posted on January 10th, 2015 by Ricky Ford in Technology.

No comments have been posted to this article yet.